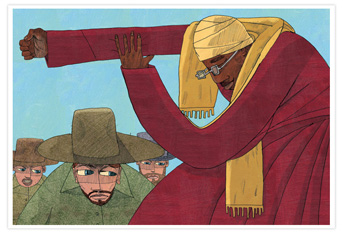 “Who are they to judge us, simply because our hair is long?” – Marvin Gaye.

As the saying goes, so goes our youth, so goes the nation. So if we help them, we help ourselves. All it will take is empowering them to advocate for themselves and self-management tools. The truth is that they can attract into their lives all their wants and needs by following the Five D’s: Decide what they want, Determine to make it happen, Diligently Do everything in their power to achieve the goal, and Detach themselves from the result and repeat.

What they can’t control is redistricting, and just like the 2010 cycle, it’s essential to get this right. What were the dynamics at play in places like New Jersey back then? Political experts noticed a philosophical and political trend that may give us an idea of what to do now. It seems that voters in New Jersey were becoming fundamentally different from voters in places like Ohio. It’s not incidental that voters in both states embraced policies supporting working-class men and women and rejected policies that centered around the “virtues of selfishness.” Adding to the mix, there were sizable shifts in New Jersey’s population that created a significant demographic trend.

We saw the impact of voters of color (VOC) when we looked at Middlesex County, where the progressive politicians were defeated for the first time in decades, 47% to 45%. Note that the population in that county, which includes New Brunswick, had grown 8% and was 10% African American, 18% Latino, and 21% Asian Pacific Islander.

This dynamic played a significant role in New Jersey, where VOC were 25% of the electorate in 2009 and 30% in 2010. Census data showed cities like New Brunswick grew 2.3% to 55,181 and had well over 14,000 key VOCs on the voter rolls. Information like that impacted the entire redistricting process for the state.

Looking forward to future redistricting, the fundamentals are beginning to take shape. Though no one can predict what will happen, one thing is true — the American electorate has already started to demonstrate the impact of their changing demographics. Therefore, any politician with an effective strategy to embrace students of color will find themselves well-positioned to impact the political world.

There is no doubt that young Latino and African American voters will impact future elections. The truth is, they have always been significant threads in the political fabric of this nation and continue to become more valuable every decade. Therefore, the sooner students of color figure out their wants and needs, the better. That’s probably the best part of our democracy; their collective vote represents our guiding and future beliefs. If everyone casts a ballot, it doesn’t matter where they come from, their zip code, or how they got here. They are all worthy of respect and deserve the right to cast and have their ballots counted. Likewise, putting self-interest before compassion is not an American value; it’s selfish. Being selfish doesn’t just prove a lack of empathy; it demonstrates a lack of common sense leaving the rest of us to do everything in our power to achieve justice.

Kirk Clay is the President of Capitol View Advisors — a collaborative investing and acting on its values in creative and strategic ways to connect communities with the information and resources they need to support and further their aspirations.