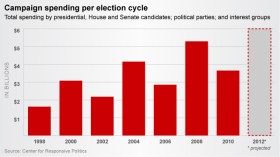 What a difference “a state” makes. Can you believe that the GOP nomination contest now features a front running Newt Gingrich? All it took was a 40% win in South Carolina and boom. Then tonight’s “Hispanic” debate in Jacksonville, FL may give Newt even more momentum. That may lead Romney to consider a flip on his “dream act veto” position. I guess the fact that Hispanics make up 12% of the Republican Party in Florida may have something to do with that.

As this election season kicks into full swing, it is clear that there are a number of important states and districts in which People of Color (POC) may help to decide both primary and general election results. For example POC in Florida make up 29.5% of the Citizen Voting Age Population and 69% are registered to vote. In 2008, POC made up 28.9% of the vote share in the general election although more than a third did not vote (37.7%). (census.gov) Imagine what could happen in 2012 if we energize and turn out every eligible voter?  Especially in places like Jacksonville, FL where there are over 200,000 “Key” POC voters and where voters were recently able to elect that city’s first African American mayor.

Changes in congressional seats are at stake as well. We know that reapportionment gave Florida two congressional seats. So, there is no doubt that there will be a number of heated contests in which incumbents will face strong challengers. In these races pitting refurbished conservative candidates against surging progressive candidates, most of the focus will be on the fact that the Democrats need 25 seats to take back the house and the Republicans need 10 seats to win control of the Senate.

But there are other dynamics in these elections that may prove to be far more significant. Political experts often portray people of color as incidental as it relates to the broader sphere of American politics. Moreover, they seem to find it difficult to connect election results to evidence-based demographic trends. On one hand, they seem to recognize the fact that certain POC turnout levels will produce reliable results. On the other hand, they miss the fact that those turnout levels are connected to resources and political investment in POC communities.

The astonishing part is that most everyone acknowledges the unspoken high watermark. The fact is that, 4 years ago in South Carolina the POC community lit the torch that led a young African American candidate to the Presidency. But this didn’t just happen on a wing and a prayer; POC organizations began to connect the dots in early January. Moreover, these organizations did not follow the “vintage” campaign models for POC engagement.

In particular, PowerPAC made a significant investment toward engaging communities of color early in the Primary season. In fact, they were the first organization to hit South Carolina’s airwaves. They understood that “hope” and “change” wouldn’t have a chance if someone did not expand democracy to South Carolina’s POC community early. They knew that there were pockets of voters that could be the difference if given the chance. The results show that all the POC electorate needs is a systematic political structure powered by evidence based data. Note that he won the Primary with 54% of the vote.

The same holds true for other parts of the country. Young POC politicians are running for office in central Florida, northeast Texas, southwest Ohio, south central Arizona, Southern Nevada, and a number of places in California.

There is no doubt that these politicians are more than capable of running competent campaigns. The truth is, they are beneficiaries of the civil rights movement and gained valuable tools from our forebears. That’s probably what led them to throw their hat in the ring to begin with. Their interests represent our collective guiding beliefs. Once in office, POC politicians will have the opportunity to build coalitions and work towards creating a collective social, cultural, and economic apparatus for Whites, Latinos, African Americans, Asians, and Native Americans.

But will their war chest benefit from the collective social economic advancements of the progressive community? Will they receive the support they need to defeat their opponents? If we care about diversity in political leadership, we shouldn’t just express our support through the vote. We should express our concern through monetary civic engagement. The fact is, if you invest political resources in a POC community, you will most likely have a positive return. That’s popping the CLUTCH.